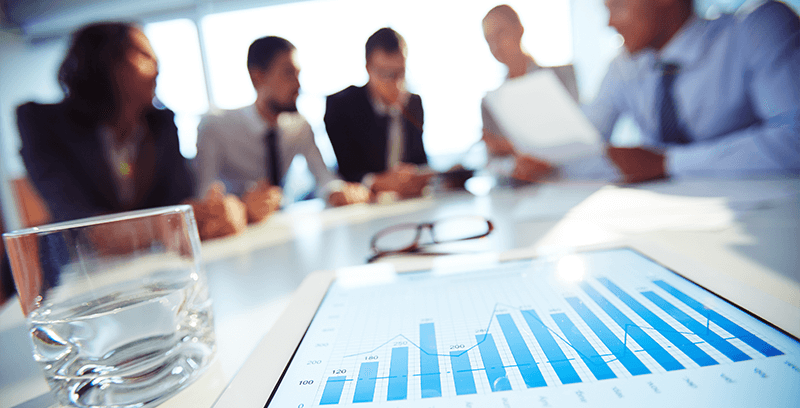 While numbers can lie, sometimes they’re real and tell an interesting story. In the insurance industry, for example, in the next four years, there will be $1 trillion in personal lines insurance premiums at the crossroads where primary carriers meet 300 million people living in the United States.

Based on the 2010 U.S. Census (revised March 21, 2013), the Census Bureau’s counts tallied 116,716,292 occupied housing units out of a total inventory of about 131 million. The census also indicated two-thirds of the 300 million people dwell in roughly 76 million owner-occupied housing units. The other 100 million people inhabit almost 41 million renter-occupied units.

As innovations build on prior successes, the clearest path to improved performance is finding the “next piece of knowledge,” or n+1.

As for registered motor vehicles — according to U.S. Department of Transportation, Federal Highway Administration, Highway Statistics 2011 — roughly 250 million private and commercial vehicles are on the road. With more than twice as many vehicles as housing units, it could be reasonable to assume that personal lines insurers would try to be all things to all people — but that assumption would be wrong. In 2012, about 500 insurers were writing personal lines policies (home and/or auto): 211 home only; 123 auto only; and 171 both home and auto. (See Figure 1.) 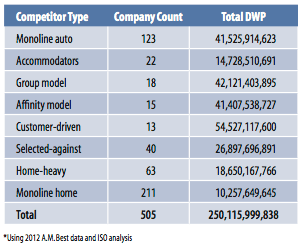 Historically, various insurers have formed to protect the financial assets of households: affinity groups that pool “like” risks (at least from a marketing perspective); groups centered around a mostly rural or mostly urban customer base; professional groups; or for-profit, stock-based public companies. Over time, risk events such as hurricanes created a reason to hold risk in specialized risk pools for property. And more sophisticated data sources, analytics, decision support methods, and Internet-enabled computer systems opened doors to previously unattainable risk management and capital allocation strategies in both property and auto lines.

As shown in Figure 2, many of the most successful competitors — based on their share of the market and their ratios of auto to home premiums — either specialized in an analytic niche in monoline auto or became customer-driven by placing more emphasis on the total insurance needs of a household. Companies specializing in households with high net worth intentionally became more house-focused, while accommodators took the home policy to get the car premium. Other companies’ portfolios changed when they lost the auto policies but retained the homeowners. Or worse, some insurers kept more of the underpriced car policies in their books of business as their more savvy competitors gained share through superior risk-based pricing strategies. 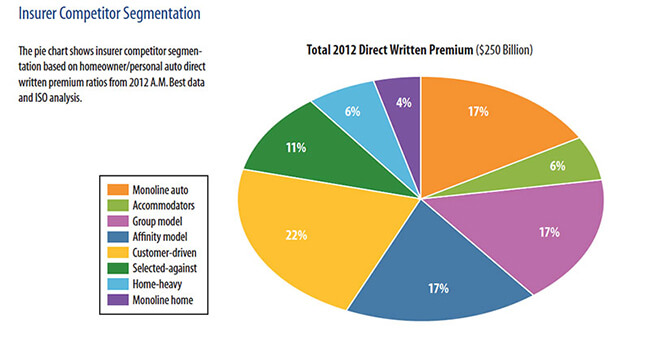 As innovations build on prior successes, the clearest path to improved performance is finding the “next piece of knowledge,” or n+1. In personal property, n+1 is found in a better understanding of how construction, occupancy, protection, and exposure can interact to predict prospective loss costs at the individual risk level. That knowledge improves risk-based pricing decisions. And dramatic improvements have been made when it comes to calculating the amount of insurance commensurate with a property’s value. This is also the case in personal auto. Refined segmentation used in risk rating has been enhanced for territory, vehicles, class plan, credit, and other factors. The most advanced companies also include household characteristics, such as tenure of customer relationship, multipolicy discounts, and bundled product cross-selling.

Unique in this critical moment is the opportunity for those playing catch-up to integrate multiple n+1 events at the same time.

An insurer’s n+1 is likely much closer than it seems — and could be a critical factor in securing a portion of that quarter-trillion dollars in annual premiums. For example, advances in marketing; advertising; channel preference; and mobile, social, and economic behavioral modeling are changing the way consumers buy insurance products. That puts a new focus on household retention and creates new n+1 opportunities aimed at better understanding consumers.

While analytics can level the playing field in the long run, the advantage goes to those insurers that adopt early and invest heavily. Furthermore, the pressure to compete increases each year as the market continues to consolidate: In 2012, the top ten auto carriers increased their share of the market to 69.8 percent, continuing an unbroken record over the last 20 years. The rest of the market will have to catch up quickly. Those insurers will need to attain the state of the art in personal lines risk assessment and decision analytics capability.

Unique in this critical moment is the opportunity for those playing catch-up to integrate multiple n+1 events at the same time. Rerating an entire portfolio of customers on a multitude of improved auto and home risk rating characteristics simultaneously is both efficient and effective. That way, only one big-book disruption event needs to be managed, and everything can go to market much sooner.

The smart money will be on insurers moving toward successive waves of n+1, making it a cultural component of the evolving insurance industry. If insurers add all the numbers correctly, they’ll reach the same conclusion and either succeed and thrive or face the consequences.

This article was originally published in Verisk Review.

Marty Ellingsworth is president of ISO Innovative Analytics (IIA), a unit of ISO focused on advanced predictive modeling tools for the property/casualty insurance industry. Mr. Ellingsworth joined IIA from Full Capture Solutions, Inc., where he was cofounder and executive vice president. He has more than ten years of experience in the property/casualty insurance industry, with a focus on applied analytics and claims. For five years, he served the Fireman’s Fund Insurance Company. Mr. Ellingsworth’s 24-year career also includes positions at RiskData/HNC Software, Workers Compensation Research Institute, Beech Street Managed Care, and the U.S. Air Force. He received his bachelor of science degree in operations research from the United States Air Force Academy and his master of science degree in operations research from the Air Force Institute of Technology.